“I consider your work the leading pragmatic, industry-focused tool for (sustainability/ESG) assessment and improvement. Every global corporation needs that.”

Launched and Shaped in Corporate Boardrooms

I have had the privilege over many years of participating in over 60 board of directors meetings of major (mostly Fortune 500) corporations. I was there as an independent advisor, providing guidance on environmental, social and governance (ESG) risks and opportunities. During the late 1990’s, corporate boards in the U.S. began discussing how some leading companies – particularly those based in Europe – were beginning to address sustainability in a comprehensive way.

In 1997, I participated in two Fortune 500 Board of Directors meetings that sowed the seeds for ESG Navigator. Ashland‘s Board Public Policy – Environment Committee Chair Patrick Noonan asked me if we could develop a scorecard that would help board members navigate sustainability. Separately, Honeywell (then AlliedSignal) CEO Larry Bossidy and his outside directors wanted a maturity model to help them plan strategically.

During those 1997 Board meetings, I decided to craft The Sustainability Scorecard – later renamed ESG Navigator.

Since 1997, ESG Navigator has evolved greatly. 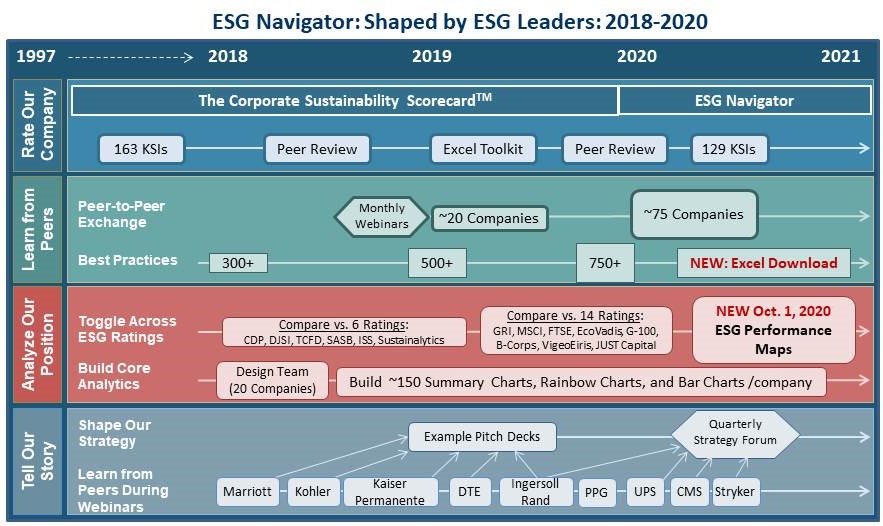 ESG Navigator™ is a copyrighted product of, and is wholly owned and operated by Hedstrom Associates.